Mama arrived home from work around 12:45am to find her two chil’ren huddled together on the 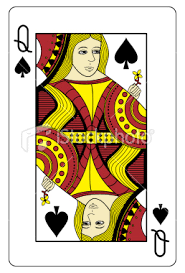 sofa.  She hated to leave us so often for work, but as a single mother with no family support in Miami, she had no alternative. When Songbird left us three years ago, she didn’t know if she could go on: he was a provider, protector and her best friend. And he was also a babysitter. Their system was perfect, when one of them was off to work, the other would remain with us. It’s times like this where his presence was missed the most.  Ms. Denise could not deny that although her husband was everything a woman could want; his presence alleviated a tremendous burden placed on her.   To commemorate her first and only love, she had some ink done to pay tribute to his memory. Imagine that, Ms. Denise, the mother of two, creepin’ up on 40 with her first tattoo.  I actually took her to the place where I had my tattoo done in Flea Market USA, Pepe’s Piercings and Tattoos, Booth 128. They did the cheapest work and rarely asked any questions. I was only 13, at the time, when I had a Queen of Spades card image branded on my right calf for $70. A year after Songbird died, Ms. Denise decided do something her husband would never expect from her—get a tattoo. She asked Pepe to tattoo the silhouette of two songbirds perched locked in a kiss, below them in script the sentiment “I need a little Songbird.” and the date “August 12, 1997.” Mama was hardcore; she decided to get it on her left forearm. Whenever she needed the strength of her best friend or wanted to share some excitin’ news, she’d look at her forearm and he was there. This tattoo and her wedding ring which hung from around her neck on a thin, 14kt Figaro gold chain were my mother’s most-prized possessions. These were just small gestures to honor the love she had for her husband. But Mama always told us the greatest testament of their blessed union will always an’ forever will be their chil’ren— Poo and Me.

From Chapter 3: Kids and Politics

At 5:35pm, the random sounds of the factory were now heard infrequently, as employees headed out the door. In an hour-or-so, it would be me and the boys making any and all noises at the Rohde.  Ms. Thompson rummaged through her office desk for a Kodak 35mm disposable camera. Marco and Ronny’s energy waned as they sat patiently waiting to have their pictures taken. Just minutes before, Ms. Thompson and I struggled to attain a useable set of fingerprints from the twins. Due to the Department’s financial constraints, I was relegated to using paper from the copier as a substitute for the normally studier card stock used for finger printing.  And I also had to use an ink blotter used for stamping mail; to my dismay the ink was lime green.  The first set of prints I took was laughable; they looked like a preschooler’s finger-painting project rather than instruments used to identify missing children. Before this day, I never fingerprinted anyone in my life— and it showed. After careful thought, I deduced that working here was going to be very challenging not because of the sheer danger of the job or the unpredictability of a client’s behavior, but because of the internal mechanisms placed in a caseworker’s way.  Just like the ordeal I just experienced to get an extra car seat for the boys’ placement. I had to literally beg, Mr. Steven Rigby, the supervisor in 425 for his unit’s assigned car seat. When he finally opened his office after ten minutes of pleading and groveling, I couldn’t believe what I saw. This guy had the fuckin’ thing chained to his desk under lock and key. Apparently, car seats are hot commodities here! And when Rigby finally authorized the use of his car seat, I had to sign a contract stating I’d return it in 48-hours or receive a written reprimand.  Fuckin’ unbelievable—a rent-a-car seat operation at DCF.  But overall my whole day working with the Department was a totally surreal experience…one I will never forget.  Can you imagine this was only my first day?

My lips were dry from talking and I did not dare ask for a sip of water.   My white, DCF polo shirt was soaked with sweat. But that was my stupid decision to pick the worst color shirt to head out in the field in. I was more concerned with fashion before function— a typical rookie mistake.   The heat was stifling at 6306 Northwest 12th Court, this particular housing unit wasn’t equipped with an A/C unit and I regretfully requested that the family keep the doors closed to prevent any additional family members from entering the tiny dwelling.  Ironically, my current investigation, Abuse Case 00-2526321, proved to be one of my most heated cases I received thus far. Mother’s prior dependency case history, the sheer number of participants involved, and the volatile location all added to the tension.  Around 25-people waited in the next room and outside of the apartment for me to make my decision. It’s amazing where this job takes you. Three hours earlier, I was sitting at home in my underwear plopped in front of a 32” TV waiting for the Dallas Cowboys to play the Tennessee Titans in the NFL’s 2000 Christmas Day offering.  Now I was in the projects, sweating my ass off, wishing I could spend a little time with my own family in Palm Beach— or better yet making love to my new boo, CPI Tamara Norvil.  We did get to spend yesterday together before she went out of town, since Tamara promised her big sister that she’d spend Christmas with her family in Naples. I wasn’t so lucky; as a rookie and the least-tenured in my area, my holidays off were now an afterthought.

I decided to interview the mother, Ruth Jenkins, first. As in most of my cases, I felt dealing with the most irate participants head-on was the best practice. It allowed them to blow off steam and it gave them a sense of control—even though I knew otherwise.  After providing the mother a copy of her Rights and Responsibilities Form (the R&R), I read mother the allegations. Then, I watched in disbelief as this lady stormed out of the house yelling, “Oh Lawd! HRS is tryin’ to snatch my chil’ren! Somebody help! These crackas tryin’ to take my chil’ren.”  After I convinced the frantic mother to come back inside the home, she proceeded to call every living relative on her family tree.  Relatives came from as far as Homestead so none of the children had to enter foster care. From grandparents to baby daddies to great aunties, they all came. Now they were all outside a bedroom door waiting for me to render a decision.